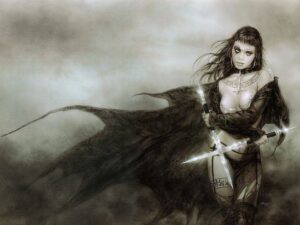 “Talents” the new biblical term that means ‘gifts of the Sprit”  How did the scripture “Parable of the talents” read?  Paraphrased– if you don’t use your gifts given to you by God you lose them eventually.

So then starting 2012 spirituality began to shift and change.  Jesus’ words coming to pass, now ramped up in 2017.  Which prophesies you may ask.  Well, some parables we didn’t know where prophecy for instance.  We didn’t know that when losing a spiritual gift it would shift to someone else.

How to Lose a Gift of The Spirit

God’s gift are without return (repentance) He keeps a certain amount of gifts on earth in mankind that He doesn’t take back.  But a redistribution of those gifts was prophesied in the “Parable of the Talents”.

Have you ever gotten a really strange feeling of meaningful instance when passing by another human at the grocery store or bowling alley?  I have.

How I Received New Spiritual Gifts

I passed a strange looking woman who seemed somehow timeless.  Perhaps her time of waging spiritual warfare or seeing into dark & light realms not of our dimension was over.  Perhaps it wasn’t that she never used the gift maybe she was to die soon and the gift passed to me in an instant as a cape, no, a…..staff….no…..MANTLE!   As Elijah passed his mantle to Elisha he left the Earth in fiery chariot.

But also there are unfortunately those who receive splendid spiritual gifts while on Earth and refuse to use them because they are ashamed.  The programming that makes fun of all things godly is just too much for them to ignore.  The masses, the majority, the heard mentality has their ass.  And understandably.

I have been called many things for believing in magic things that don’t match the status quo.  And the worst offenders are those Christians who claim spirituality.  They give Jesus lip service as they honor him with their words but their heart is far from Him.  They never really got real with God.  Shallow prayers =shallow relationship.

There are white witches who are closer to Jesus than most Christians.  There are sorcerers who know more about spirituality than most Christians.  Their are Satan worshippers who will be saved by their faith in Satan living eternally in hell that place of their choosing.  And why else would Jesus say “I wish you were either hot or cold but since your neither (luke warm) I take no notice of you.”

Balance is a thing. God has clearly shown me this.  People who choose the dark side and know their god have a better chance at eternity than those who reject spirituality & eternal life by embracing religion of lies…the harlot. (now called “the great whore” in the desecrated bible).

Most Gifts During the Church Age Came by the Laying on of Hands & Prayer In Full Gospel Churches  By Transference and Impartation.

Pentecostals believe in the gifts of the Spirit. They also know (usually) that God inhabits the praises of His people.  The Pentecostals are the most made fun of religion for a reason…they are the most powerful religion.  Satan mocks them heavily. He lies and mocks.  People are repelled by a mere mention of Pentecostals due to the image of the beast programming-TV-phone.

Why are the majority of You Tube Christians Blind to Jesus’ Prophecy Fulfillments.

They sport the mark of the beast.  The super blind will take the carnal natural mark of the beast which edits human geneology making it corrupt.  The spiritual mark is on the foreheads of men.  In plain sight.  It ain’t pretty.  God will forgive men if they repent and seal them if they seek Him with their whole heart.  Fear is a good motivator to seek God and save one’s soul.

What Are the End of Days New Spiritual Gifts.

With the end of days (men shall be eating, drinking, marrying, given in marriage, and so forth with no realization of the time of the end).  As in the days of Noah so too are the days of the coming of the SON OF GOD.  Supernaturally desecrated bible now says “son of man” and much more desecration of the holy words God gave men.  Christians cannot remember the bible when it was truly filled with God’s inspired words.  Even the grammar and dialect is grossly desecrated.  It very hard for those who have the end of days gifts to see and to watch blind men trodden under foot all things sacred by calling a desolate mass of nonsense by God’s name.  We see the abomination of desolation of the holy place.  We see Amos 8:11 &12 the famine of God’s words on Earth.

We saw His words go up as a scroll.  Even the original bible KJV before the supernatural bible changes

Was greatly skewed.  As if it was a mystery a riddle.  All Jesus’ words are Truth but they are not playing out the way the preachers or Hollywood portrayed.  Not even close.

Who Are the Two Witnesses

Example-The two witnesses.  The scripture used to say “The two witnesses, witnesses of The Son of God, born again will be killed by the beast in the street while the whole world watches and mocks.”

We all saw it happen.  In North America we saw George Floyde killed by the system of the beast in the street while the whole world watched and mocked.  Same thing happened in every other realm of Earth, S. America had their witness and so on.

How do I know?  Because I was gravely injured and could barely breath.  It was horrible.  My arms and legs and face went numb due to fear.  One of the witnesses came to me and healed me.  They walk the earth now to heal the chosen few.  One of the “Jacob’s Troubles” we heard about.  A new phrase biblically but never the less a truth. Take it or leave it.

What else?  What else do we who have end of days gifts see?  Prophecy Fulfillments Since 2012.

Security seal of Daniel is off the bibles.  Amos 8:11 &12 near completion.

Mandela effects a hundreds of thousands of in your face miracles happening.  Many people see the miracles of the different mandela effects.  Signs and wonders.

Signs in the sky.  The horizontal moon.  Smiley face moon spins throughout the night.

The strong delusion.  Many are blinded to the end of days signs and wonders that are obvious to the rest of us.

The dividing of time prophecy has happened.  Hence a group of people are vailed.  The other group see.  And a third group see even more.

The separation of the sheep & goats

The sun is white.

All of language is changed drammatically.

The strong delusion is upon men who have the mark on forehead.

DNA tampering is in full swing as in the days of Noah prophecy.

The Great Harlot is revealed as the corrupt church.

The new gospel is here that says “do as though wilt” and embraces the desecrated bible.

One world Gov. is here as they all march to one drum beat obviously.

The antichrist is already reveals as The Gates of Hell. Bill Gate.

The False prophet put Gates of hell in power.  He is called The Oracle of Omaha because of his prophesies.  Warren Buffet.  He gave the foundation most all of his money to put gate in power.  As prophesied.

Image of the beast revealed as the TV & phone.

The Holy Spirit is poured out on all flesh

Many many people are having end times dreams and visions just as prophesied.

The Revelation 12 fulfillment occured in the Heavens.

We know who the woman of Rev. 12 is.  The spirit intercessors.  They are the only one’s who fit the description and who birth and travail and have for many years.

The intercessors are given the prayer for the time of annunciation.  They are lead to announce the coming of Jesus.  It started around 2018 and is finally fading.

God has set aside His chosen for purification, cleansing, learning, warfare, as they watch prophecy fulfill first hand.  They are sealed.  They can see the seal and the mark.

The Torch Bearers are anointed.  God has appointed torch bearers.

Then there’s the insanity of the powers that be political and otherwise.  rampant evil, ect.

Sign of Jonah happened in June 2021…AGAIN as prophesied.  Its in the news.

“In those days a greedy and adulterous generation shall seek a sign of His coming but no sign will be given them except the sign of Jonah the prophet.  Who preached to the Ninevites and they repented.  A man was taken up into the mouth of a whale AGAIN.

Father said “all shall be revealed” during the time of the apocolypse.

The Beast system is revealed and the evil thereof, to many people not just the few.

His sheep know His voice.  Fulfilled.  Those who do not know Jesus and who did not keep God’s words on their heart cannot see the desecration of the bible so blatant, so disgusting.  Even the dialect and grammar is changes.

I will not list the thousands of mandela effect miracles here to bring people in by believing that the spiritual world is a real thing.

The wolf speaks from the holy place.

One world money system is the dollar.  But more is coming on that.

The restrainer is removed that held back the ruling corporation.  It was a competition.  Now the corporate rule is obvious by seeing the actions of big pharma in all countries.

We think perhaps the restrainer of men is also being removed.  Their conscience that is regret remorse, guilt, shame, the conscience itself.