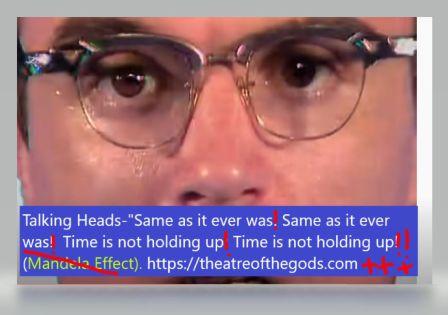 The Most Frustrating of The Signs & Wonders for those who see.

Why is it frustrating.  Jesus spent His whole life living with people who were un-enlightened as Himself.  They could not see what He saw.

They could not know what He knew.  And they could not accept TRUTH even when it was in their face.  THIS is the suffering of Christ before His death.

This is the same type suffering of those who see the Supernatural Bible Changes of all bibles and especially of the KJVB.   While 99.9 of professing Christians around those who see sing and chant “Same as it ever was, same as it ever was“. “Time isn’t holding up, times isn’t holding up, after the money’s gone, after the money’s gone, that’s not my beautiful wife! Where is my beautiful house?”

(prophecy money is on its way OUT anybody can surely see that and we know the prophesies of the bible told us that a one world money system, and a one world governments and religion are a sign of the end of the age.)

About the Vile Changes to All Bibles Old and New, digital, audio, and paper, plastic, and paint…ALL Bibles have undergone and are still undergoing supernatural changes to the content.

At this point easily 50% of the bibles have changed.

4.Insults to men (God calling men “stupid” in some versions including NIV.)

7.doctrinal changes galore (Love is exiting while hate is increasing.  Blood is replacing Faith, new gospel is blood and grace. True gospel is Saved by Faith in Jesus, seek God with your whole heart and ye shall find God.

Why do you say the Mandela Effect & Strong Delusion are Two Different Things?

Because the bible changes are another animal completely not simple Mandela Effects.  The strong delusion is at play over the eyes of the Christian masses.  And over all of those who knew the books (bibles) well.  People such as scholars, self taught laymen, those who studied at length using Strong’s Exhaustive Concordance, Lexicon’s, Greek or Hebrew Interlinear bibles etc.  ALL, ALL of those who knew the book and do not have on the armor of God (theory) are blind to what the bibles said just three years ago.

The majority of Christians have lost their memories of what the bible once said.

The majority of bible scholars have lost their memories concerning the bibles.

As for those who had no interest in the bible ever…there is no need for evil to put them under the strong delusion because they do not consider the bible the words of God inspired by God and given to men.

The Security Seal if OFF the bible.  Father has let the book go in order to bring in His sheep who follow Him wherever He goes.  Father God has left the books and the evil one now rewrites it.  Yet most Christians now follow the wolf in the books with no recognition between blessing and blasphemy.  They never knew Him to begin with.  For it was the bible they worshipped rather than God/Jesus.

It was the preacher they followed.

Those under the strong delusion have not sought God with their whole heart.  For if they had they would have been protected by he spiritual armor of God IF they Loved Jesus they would have known His voice.

“The Good Shepard’s sheep know His voice and do not follow the wolf”.