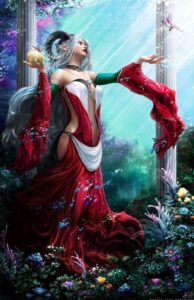 First let’s define a “god”.  Obviously we mean no infringement upon The Most High Creator of The Heavens and The Earth.  As a matter of fact…there are no gods that God Himself didn’t create.  It is my belief that only God The Creator gives right for a human to become a god.

More will be revealed.

What is a god?

A God has supernatural powers that far surpass any earthly norms.  Powers such as strength, might, brain power, wisdom , knowledge, healing, invincibility, power to travel to other realms, many other realms.  Power over humans.  Power over the minds of humans.  Supernatural gifts unequalled by any depending on their appointment and responsibilities.  God’s are given weapons of war to wield on the new earth or in the Heavenlies because they can be trusted with them.  Christians who want a panacea of paradise would not want to be a god.  Many Christians prefer illusion over Truths that are uncomfortable or scary.  This is understandable.  We mustn’t judge those who prefer the lie, though it’s very hard not to judge harshly.  Isn’t it?

Those trusted with great truth must have the emotional condition to endure such Truths that may go against their prior paradigms and belief systems.

What did Jesus tell us?

“He whom can be trusted with a little shall be given much”.

God’s are given great power over fear, illness, plants, animals, humans, and over their own path.  They must be trusted with a little to be trusted with alot.  They can be trusted by God with the knowledge of great evil.  Trusted with power on earth that they used only for good.  Being tempted they did not waver for greed, vanity, or some codependent action.  They did not use their power for carnal bestowments.  Only health would be allowed.

They know their value in Christ therefore its important to God that they are in good health. This again is wisdom to be trusted with a little.

They know death.  All the 144 have died at least once and come back.  Some have nearly died for the sake of their testimony of Jesus.  That means “what Jesus did for me”.  Not some copy paste gospel of redundancies that we are frankly, very weary of hearing over and over and over from professing Christians.

God’s have power to carry out their jobs.  Without meditation or some form of higher learning how would a man trusted with little connect with God to learn.  They would have ignored the preachers proclamations of false evils such as meditation.

They would have sought God with their all. Their all.  Leaving behind the common desires of this world.

How Does a Man Become a God?

Who are the 144 thousand?  Men who shall be made into powerful guardians of the New Earth.  Why?  Because they have been trustworthy with a little.

What is it that the 144 have that others do not, that brings them favor with God Himself?

Obviously they know God and God knows them well.  They hide nothing of themselves.  They have offered every part of themselves to God to “fix”.  Especially their hearts.  They have great Faith, great Hope, and a heart toward God’s own heart.  They know they need God and they hit this place.

“Oh wretched man that I am, who shall deliver me from this body of death?  Praise be to Jesus The Christ who Father sent.

‘Oh but that’s more Christian lies you may say.  That stuff can’t be true, they lie about everything.’

Certain truths must and will be given to all of mankind.  How do you hide GREAT TRUTH?  You plant it among great astounding lies of course.

Santa Claus was lie therefore so too Jesus MUST BE ALSO A LIE…right?  Wrong.  Great truth planted among the traumatizing lies a young child endures of betrayal and deception.

There is a reason for all that we see and hear.

Father enjoys those who can open their minds to wisdom.  But wisdom won’t come until first we open our mind & heart to God Himself.

What else are the 144?  There are those who know both evil and good.  They must know evil so they finally choose good.  The 144 do not have great Love unless God Himself has granted it to them.  For God is Love.

You cannot deceive God for the yearning of power.

When the 144 received most of their gifts prior to the great tribulation they seriously thought they were inferior to most everyone on earth.  It was a lie not false humility, a lie.  They believed a lie about themselves from the beast system at large.  They have come out of great tribulation and most were probably bent on self destruction for a time.

But they have learned that they have not the right to condemn themselves or anyone.  Satan is the accuser of the breathren.

Christian Preachers and their Lies to the Masses

Preachers have preached this pish posh for years.  Why?  If we knew that gods were real it would be a great Truth that we could use to our advantage.  Those who hoard knowledge can’t have the slaves contacting and making deals with gods for power or otherwise, now can they?

The Power of a god

Why is it that the beast spends all its time lying to and trying to destroy the heart and minds of believers and all humans for that matter?  Simple–The beast fears what humans can become.

Only humans can become gods, appointed by the most High God Himself.  The beast puts all its energy into targeting Christians.  Why? Faith.  He fears Faith.  God looks upon the heart.  No man none are perfect.  So don’t think it’s perfection that gets a man into god-hood.

We think the time for God appointing gods is wearing thin.  Why?  Because the end of the age is here and there just isn’t time for more great life lessons and long term personal emotional and spiritual growth.  The end is near.  Many shall go to their eternal homes very soon.______Jazweeh